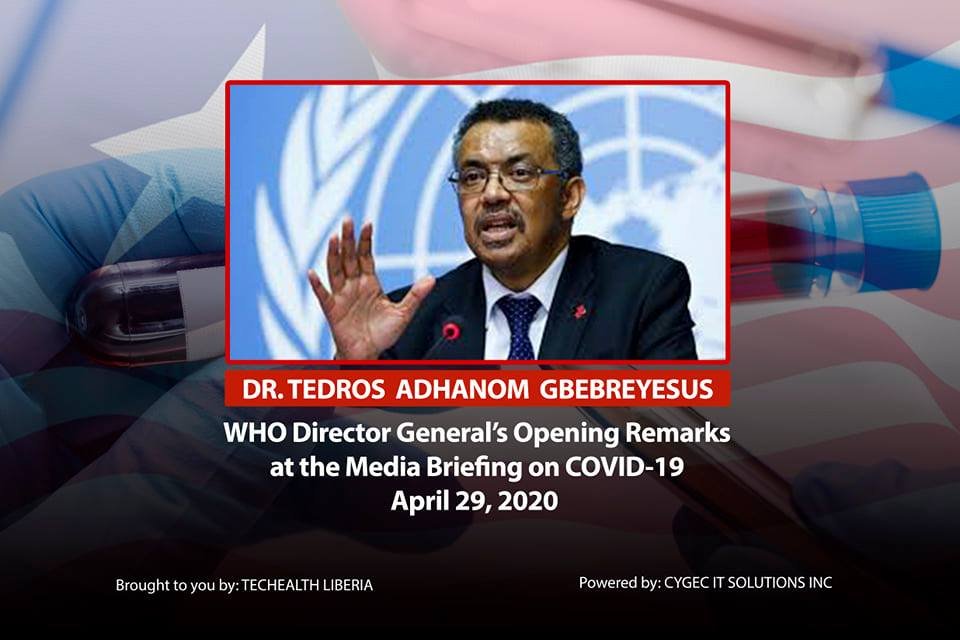 As of tomorrow, it will be three months since I declared a public health emergency of international concern over the outbreak of novel coronavirus.

Today I’d like to take a few moments to look back at the period preceding that announcement, to be clear about what WHO knew, and what we did.

On the 31st of December, WHO’s Epidemic Intelligence System picked up a report about a cluster of cases of pneumonia of unknown cause in Wuhan, China.

The following day, New Year’s Day, WHO asked China for more information under the International Health Regulations, and activated our Incident Management Support Team, to coordinate the response across headquarters, and our regional and country offices.

On the 2nd of January, WHO informed the Global Outbreak Alert and Response Network – or GOARN – which includes more than 260 institutions in more than 70 countries.

Yesterday was GOARN’s 20th birthday, and I’d like to use this opportunity to say happy birthday to GOARN, and thank you and congratulations to every single GOARN member for their commitment to responding to the COVID-19 pandemic and many other emergencies. We’re really proud to work with you.

On the 3rd of January, China provided information to WHO through a face-to-face meeting in Beijing, and through WHO’s Event Information System established under the International Health Regulations.

On the 4th of January, WHO reported the cluster of cases on Twitter. At that stage, no deaths were reported.

On the 5th of January, WHO shared detailed technical information through its Event Information System. This included advice to all Member States and IHR contact points to take precautions to reduce the risk of acute respiratory infections – providing guidance on the basis that there could be human-to-human transmission.

On the same day, WHO also issued its first public Disease Outbreak News, publishing technical information for the scientific and public health communities, as well as the world’s media.

On the 10th and 11th of January, WHO published a comprehensive package of guidance on how to detect, test for and manage cases, and protect health workers from potential human-to-human transmission, based on our previous experience with coronaviruses.

We also published a readiness checklist to help countries assess their capacities and gaps for detection and response.

Because Wuhan is a major domestic and international transport hub, WHO also advised that the risk of cases being reported from outside Wuhan was increased.

On the 11th of January, China shared the genetic sequence of the virus for countries to use in developing testing kits.

On the same day, China reported the first death from the new coronavirus.

On the 13th of January, the first case was reported outside China, in Thailand.

That day, working with partners, WHO published the first instructions for how to make PCR-based diagnostic test kits, enabling the world to find cases.

On the 14th of January, WHO tweeted reports from China that preliminary investigations by Chinese authorities had found no clear evidence that human-to-human transmission was occurring.

This is in line with our practice of reporting to the world information that countries report to us. We post country reports as is.

However, earlier the same day, WHO held a press briefing at which we said that, based on our past experience with coronaviruses, human-to-human transmission was likely. Our senior experts participated in that press conference, and that news was carried by mainstream media.

On the 20th and 21st of January, WHO staff visited Wuhan, and on the 22nd, reported that the evidence suggested human-to-human transmission was occurring.

On the 22nd and 23rd of January, I convened the Emergency Committee, consisting of 15 independent experts from around the world. At the time, 581 cases had been reported, and only 10 cases outside China. The Emergency Committee was divided in its opinion, and did not advise that I declare a public health emergency of international concern.

The Committee asked to be reconvened in 10 days or less to allow time for more information and evidence to be collected and considered.

On the 27th of January, I traveled to Beijing with WHO’s chief of emergencies, Dr Mike Ryan, and other senior WHO staff, and met with President Xi Jinping and other leaders to learn more about the response and offer WHO’s assistance.

We discussed the seriousness of the situation, and agreed that an international team of scientists should travel to China to look into the outbreak and the response, including experts from China, Germany, Japan, the Republic of Korea, Nigeria, the Russian Federation, Singapore and the United States of America.

On the 30th of January, I reconvened the Emergency Committee and after receiving their advice, because of the new information gathered they had a consensus, I declared a global public health emergency – WHO’s highest level of alarm.

From the beginning, WHO has acted quickly and decisively to respond and to warn the world.

We sounded the alarm early, and we sounded it often.

We said repeatedly that the world had a window of opportunity to prepare and to prevent widespread community transmission.

We started our early press conference. People were saying the world will be tired of you if you’re making a press conference every day, but we didn’t mind. We wanted to make sure the world understands what WHO is saying.

WHO is committed to transparency and accountability.

In the three months since the Emergency Committee last met, WHO has worked day in, day out to sound the alarm, support countries and save lives.

We’ve worked with countries to help them prepare and respond.

We’ve brought countries together to share experiences and lessons learned.

We’ve brought together thousands of experts to analyze the evolving evidence and distil it into guidance.

We’ve convened researchers to identify priorities, from all over the world.

We’ve launched a large international trial to find answers fast about which drugs are the most effective.

We’ve brought together a consortium of countries and partners to accelerate the development and equitable distribution of vaccines, diagnostics and therapeutics.

We’ve shipped millions of test kits and tons of protective gear all around the world, focusing on those countries who need our support most.

We’ve worked with tech companies to fight the infodemic.

We’ve kept the world informed in multiple ways, including these regular press conferences, answering your questions.

We’ve brought together entertainers to provide music and laughter, even in these dark times, using this opportunity to thank Hugh Evans from Global Citizen and Lady Gaga.

And we’ve watched with admiration as the world has come together in solidarity to fight this common enemy.

We share the grief and pain of so many people around the world, and we share the hope that we will overcome this pandemic together.

There’s one thing we haven’t done: we haven’t given up. And we will not give up.

Our commitment remains to serving all the people of the world with science, solidarity and solutions, but above all with humility and respect to all people and nations.

WHO is now working to provide the critical strategies, solutions and supplies that countries will need in the coming weeks and months.

One thing that we would ask is unity at the national level, and solidarity at the global level. More than ever, the human race should stand together to defeat this virus.

I have said it before: this virus can wreak havoc. It’s more than any terrorist attack. It can bring political, economic and social upheavals. But the choice is ours, and the choice should be unity at the national level. The choice should be global solidarity, standing in unity.