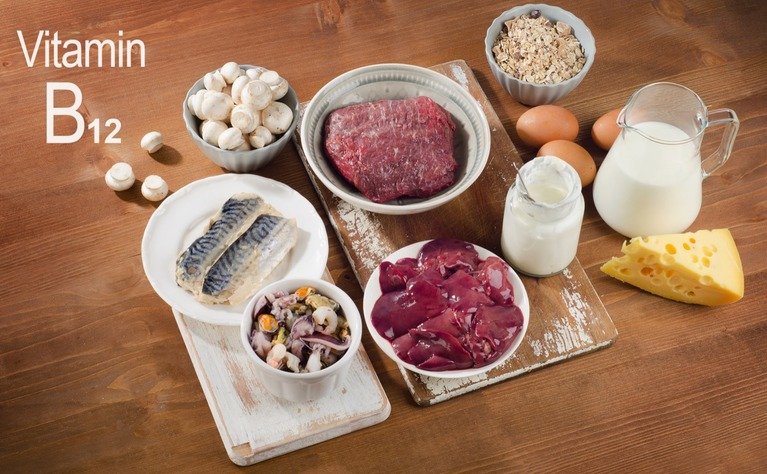 Vitamin B12 deficiency is one of the most prevalent nutritional deficiencies. It causes a range of symptoms, such as fatigue, forgetfulness, and tingling of the hands and feet. The reason for the wide variety of symptoms is that vitamin B12 plays a principal role in numerous body functions.

Vitamin B12 has an important function in the production of DNA, which is the body’s genetic code. DNA directs proper formation of every part of the body.

Vitamin B12 also reduces homocysteine, one of the body’s naturally occurring chemicals. If homocysteine is not properly metabolized, then it causes inflammation and toxic damage to the body.

The Benefits of Vitamin B12

B12 Deficiency Symptoms and Effects

Anemia is a diminished function of the red blood cells (RBCs). The chief clinical manifestation of B12 deficiency is megaloblastic anemia, which is a type of anemia that often produces fatigue and tachycardia (rapid heart rate), and sometimes dizziness. Vitamin B12 is a nutrient required for normal red blood cell production. RBCs deliver energy-producing oxygen throughout the body to power all of the body’s needs.

Megaloblastic anemia can be diagnosed by a blood test.

Peripheral neuropathy is a type of nerve impairment. This means that nerves themselves may be damaged or that there is a deficiency of myelin. Myelin is a protective covering of the peripheral nerves. Vitamin B12 is a co-factor in myelin formation, and thus a vitamin B12 deficiency prevents myelin from forming as needed.

With B12 deficiency, direct nerve damage combined with a decrease of myelin interferes with normal nerve function. The peripheral nerves control movement and sensation of the body.

Symptoms of peripheral neuropathy usually affect the feet and hands and may extend to include the arms and legs as well. The most common symptoms include:

Dementia is a disease characterized by memory loss and behavioral changes. There are many causes of dementia, and vitamin B12 deficiency is one of the more recently recognized causes. Scientific research suggests that the dementia associated with vitamin B12 deficiency may be a result of elevated homocysteine levels.

Symptoms of dementia include:

Depression is a possible manifestation of vitamin B12 deficiency and may be accompanied by anemia or dementia.

Stroke is a medical condition characterized by interruption of blood flow to the brain, causing a physical or mental handicap. Vitamin B12 deficiency may increase the risk of stroke among young people who are not otherwise at risk of stroke. Whether or not there is a link is highly controversial, and the risk may result from excess homocysteine levels.

Symptoms of subacute combined degeneration of the spinal cord include:

Tongue swelling also results from vitamin B12 deficiency. Glossitis is the name used to describe a painful, unusually smooth tongue that can result from this nutritional deficiency.

disease and multiple sclerosis (MS) are both conditions believed to be related to an autoimmune process. An autoimmune disease is a condition caused by the body attacking itself.

Vitamin B12 Deficiency in Multiple Sclerosis

The most common cause of vitamin B12 deficiency is a lack of vitamin B12 in the diet. Vitamin B12 is a nutrient that is only found in animal products such as meat, chicken, fish, eggs, and dairy. Therefore vegans are at especially high risk of low nutritional vitamin B12, as are non-vegan individuals who do not eat enough of these vitamin B12 rich foods.

Some foods are fortified with vitamin B12, and if you want to get your vitamin B12 through vegan foods, you have to make an effort to seek out those types of foods.

Autoimmune disease, gastric bypass surgery and inflammation of the stomach are all situations that interfere with the production and function of intrinsic factor, and thus the vitamin B12 in the diet may not be adequately absorbed into the body, and instead, it is eliminated through bowel movements.

Heavy alcohol use causes changes in the lining of the stomach, interfering with production of intrinsic factor, causing B12 deficiency.

Pernicious anemia is an autoimmune disease that reduces or eliminates intrinsic factor, the protein in the stomach that binds dietary B12 so that it can be absorbed. This leads to B12 deficiency through malabsorption. This type of B12 deficiency cannot be treated with oral B12 replacement, and requires treatment with vitamin B12 shots.

Symptoms of pernicious anemia include:

Medications can interfere with vitamin B12 absorption. The most common medications that can cause low vitamin B12 levels include:

A Word From Very well

If impaired absorption is the reason for your vitamin B12 deficiency, it is generally considered more effective to get your vitamin B12 supplementation through injections rather than by mouth, as this allows the nutrient to enter into the body’s tissue directly.

A PAINKILLER THAT WILL CLAIM MORE LIVES THAN HEROIN,COCAINE AND MARIJUANA (TRAMADOL)

Mosquito Coil is bad for your health